After AGM, magnum had something to look forward to: Top Gun's visit!

Top Gun has been crowned Wrold Champions for 2006 - 2007. What's more, many Top Gun members had been part of the sequel in Bring It On 4! (http://www.topguncheeranddance.com/). It was just truly amazing to see three coaches from Top Gun right here in Singapore, coming to train Magnum Force!

For 4 days (27th - 30th), Magnum had definitely learned a whole lot from the three coaches; Bettis, Triana & Carlos. When they arrived on the 27th, they wasted no time in getting down and going through the basics with Magnum's cheerleaders! Throughout the four days, these coaches from Top Gun shared many secrets, techniques and skills in cheerleading. And for that, Magnum thanks them! =)

Well, from the above I guess it is pretty obvious Magnum has been doing much more workout than they already have been! On the first day, we went through pretty much just basics like straight toss, cartwheels etc.

It may just be the basics, but we were all doing our toss ups, cartwheels and basket toss with the right technique in mind. And by keeping the right technique in mind, everything went better! And apart from just stunts, we perfected our arm motions as well. Throughout the 4 days, they were just so anal about our arms motion that we became very particular about our arms motion as well! From the second day onwards, they started to go through more advanced stunts such as the toss up extended liberty. And the good news for that, is that most of Magnum could grasp the concept fast and stick it in their stunts! Jolly good for them =)

But accidents do happen, and it did. The four days were the toughest for some, as they fell and injured themselves. But true to their team, these people stayed on and kept on going. It may seem really easy to say that they got back on their feet and carried on, but it isn't as easy to do it. It's hard to jump with an maimed leg or stunt with a bad wrist, but they did it. Three cheers for these passionate people.

Andra had hurt his ankle on the 2nd day but after a day's rest he was back on his feet, attmepting a double cupie. Many more accidents happened, but that did not stop these cheerleaders. Everyone, and i mean everyone, were bent on learning something from Top Gun.

Cheerleading is not just about looking good, not just about being the best by yourself. It's about teamwork, determination, and trust. Cheerleaders cheer, dance & fly. They do what people think is impossible and smile as they do it. And Magnum Force has what it takes do this all. Great Job to all Magnies throughout the 4 days!

This doesn't mean that Magnum didn't have fun. Oh we had lots of fun. Training ended at 5 pm and after that, we would bring Bettis, Triana and Carlos for a little sight seeing. 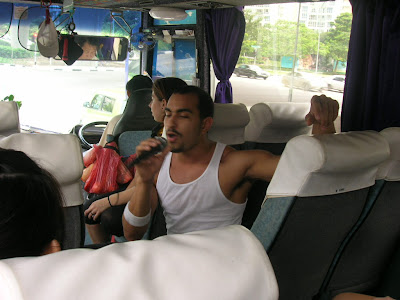 
And the best girl cheerleader is ... 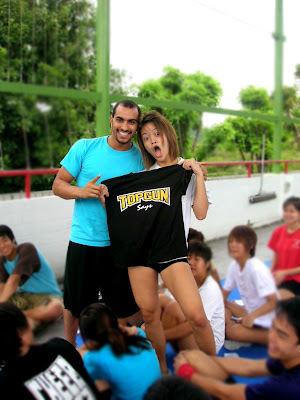 
And for the best guy cheerleader?? 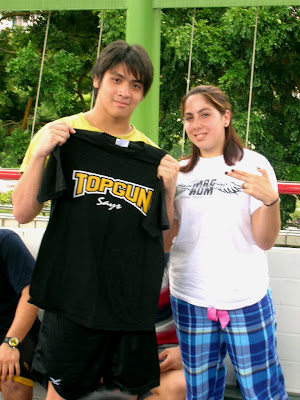 
And as a plus! Carlos decided to give his TopGun bag to Jen! 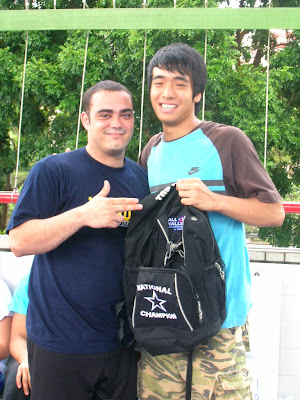 And as a token of appreciation, we gave the three coaches something to remember us by too!

After all that, we headed down to Changi Airport where they would be leaving back to the States. We stopped by Popeye's to have lunch first. And as Triana's birthday was on the 31st, we celebrated it for her. 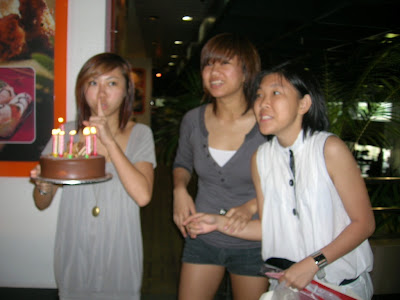 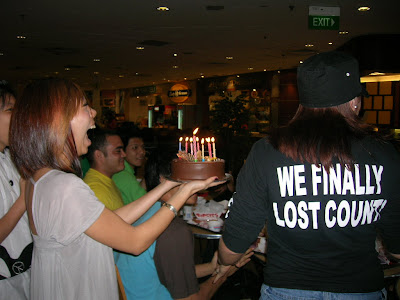 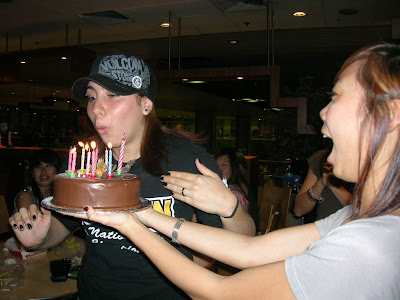 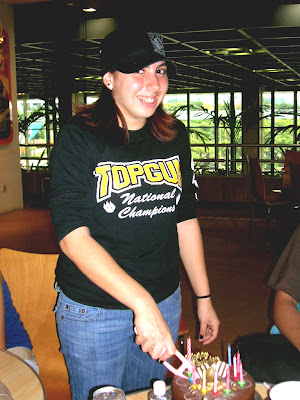 
After this, we went off to the terminal and see them off 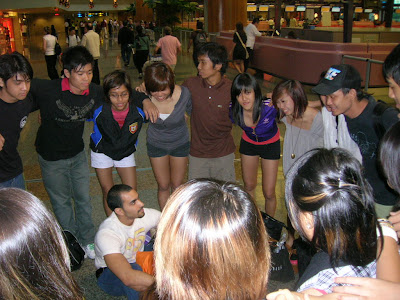 After a round of saying thank yous and good luck, they left.
they may have left, but what they taught us and they themselves will forever be remembered by Magnum Force. Thank you Top Gun and we can't wait til your next visit =)

From, Denise
Posted by Magnum Force at 8:11 PM